My first trip to Japan (Part 2) 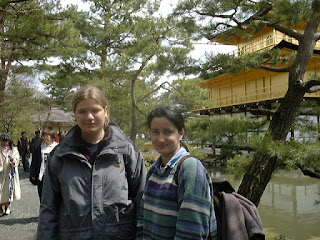 The night before my early morning flight, I didn't go to bed. It's my way of fighting jet-lag. A colleague took me to the Tucson airport before the first signs of dawn. To depart when everybody is still sleeping, and the Sun is still below the horizon, is a magical experience. I'm calm and I smile...the morning is full of hope! I feel like a tiger who lies low right before attacking the prey. I feel strong!
I'm changing flights in Los Angeles and Portland before I head to Nagoya. Portland makes me homesick...it's been a year of daily encounters with palm trees and cacti, I am missing having normal trees around me. I'm missing the birches I planted with my Dad in front of our home in Bulgaria, the walnut threes on the street, the maples in the park... But I'm in good spirits! Flight was smooth and uneventful. What more can you ask for! Next to me was a 15-16 y.o. girl on her way to visit her sister in Osaka. That was the first flight abroad, ever, and she was obviously nervous...if not terrified. I tried to calm her a bit and felt good about myself. After a couple of trans-Atlantic flights under my belt, crossing the Pacific didn't seem to impress me.
At last, we are landing. I'm going through passport control in no time. The customs officer decides to inspect my rather large suitcase and finds the 'rain prayer stick' - a Native American souvenir. He was obviously not please to see it...after all, in Japan people use dehumidifiers, thus how is a 'rain prayer stick' a good thing...
In the last minute of packing, I threw my underwear on top of everything else in the suitcase, and that turned out to be a good thing (for me)...because out of embarrassment at the sight of my lace undies and bras, the officer didn't dig deep enough to find the tin with Bulgarian feta cheese - purchased in the US and brought as a 'special' gift to my friend who has not had any Bulgarian food in over two years.
At the end I am through and ... here is Diana, smiling in disbelieve that I'm in front of her, after 4 years of separation, a Bulgarian friend arriving from America. Nevertheless, she is holding a camera and ready to photo-document my first steps on Japanese land. Moving! She has also brought me a box of candies, a traditional Japanese 'Welcome!' present. The box is tiny, dark blue color, with two white and light blue roses on top. So pretty!
The unbelievable is now a fact - I am in Japan!!!
And then the action starts - is that the right bus to Okazaki? did we buy the right ticket from the vending machine? are we waiting at the right platform?...the Japanese writing is so...confusing!!! And there is barely any English signs at the bus station. Luckily, we made it ok to Okazaki, the small provincial town where Diana has lived in the last couple of years, and which I had heard so much about...and not much flattering things. From the main bus station we are taking a smaller bus to get to Diana's apartment. The bus is very narrow, but the streets seem even narrower - a bus and a car can not just pass each other like that...one has to pull over! And then continue on. Despite the need of the described maneuver, each road has two lanes and they are well marked with blue reflectors on the road.
Finally we arrive at the small apartment where Diana's husband Rado, and Kliment - her son, are patiently waiting! Sigh!
First thing first, we all have green tea - full of antioxidants (trying to live forever? ha!).Then it's time to unpack the suitcase. An abundance of presents is putting smiles on everyone's face. Rado is overwhelmed to get the book on airplanes he so much wanted to have, but didn't dare buy because it was ridiculously overpriced in Japan. Kliment is happy with the toys and the candy! Diana doesn't even want to look at hers, I am her present for today, the others will be unwrapped tomorrow. OK, fine!
Before we know it, it's time to sleep.
So it is true - we all would be sleeping on the floor. We unfold and place the thin sleeping mats on top of the 'tatami' - traditional rice straw flooring providing some extra softness. At the morning the mats will be folded again and tucked in the closet...and so on every day! The legless chairs and 30cm tall table are moved into the corner to free some space for the mats. Everything is so tiny...like an Asian Lego world...incredible! I start feeling like a giant!
We soon doze off...we need the rest...tomorrow is Kliment's Birthday and there is gonna be a party! My first party in Japan!