Paulo Coelho gained popularity with a number of books in the recent years, but one book has a special place in my heart - 11 minutes.
Somehow it feels it is the right time to offer his story of why he wrote this book.
Relax, you don't have to read it...just take 11 minutes or less and read the story.
Hope you enjoy it!
* * *
Ever since literature began, writers around the world have written about sex; from Egypt to Greece to Japan, sex remains one of our main preoccupations. Yet despite the thousands of books published on the subject, we still understand nothing about it, and I'm not sure that Eleven Minutes will necessarily make much difference either, because when it comes to sexuality, the only real victory would be to drive out the lie that inhabits our imagination, and this will only happen once we find the courage to try, and possibly fail, to tell the truth about what we feel. We men lack the courage to say to a woman: teach me about your body. And women, likewise, never say to us: learn about me and my body. We are stuck with the primitive survival instinct of the species, with the fake freedom of being able to speak openly about the subject at any restaurant table, only to discover, within the four walls of a room, that we are frightened, insecure, fragile animals. What should be a magic moment becomes an act of self-blame, a sense that we have fallen short of the other person's expectations. We forget that this is one of the few situations in our lives from which the word 'expectation' should be banned.

During my own lifetime, I have experienced sex in many different and contradictory ways. I was born into a conservative age, when virginity was the defining characteristic of any decent young woman. I witnessed the emergence of the contraceptive pill and of antibiotics, both indispensable for the sexual revolution that would follow. I plunged enthusiastically into the hippy era, when we went to the other extreme, with free love being practised at rock concerts. I now find myself in an age which is half-conservative, half-liberal, an age haunted by a new disease resistant to all antibiotics, a time when no one knows quite where they are going.

We live in a world of standardised behaviour: there are standards for beauty, for quality, for intelligence and efficiency. We believe there is a model for everything and that, by following this model, we will be safe, which is why there is a sexual standard too, one made up, in fact, of a series of lies: vaginal orgasm, virility above all else, that it's better to pretend than to disappoint, etc. As a direct consequence of this attitude, thousands of people have been left feeling frustrated, unhappy and guilty.


It is part of a writer's role to reflect on his or her own life, and writing a book about sexuality came to be a priority with me. At first, I thought I could deal directly with it by describing an ideal relationship between two people; I tried various approaches, but all failed. It was only when I met the prostitute who would provide the connecting thread for this novel that I realised why I couldn't write the story: in order to write about sublime sex, I had to start where we all start - with the fear that everything will go wrong.

Eleven Minutes does not set out to be a manual or a treatise about a man and a woman confronted by the unknown world of sexual relationships. It is an analysis of my own trajectory, although without, in any way, passing judgement on my own experiences. It took me a long time to learn that the coming together of two bodies is more than just a response to certain physical stimuli or to the survival instinct of the species. The truth is that it carries within it all the cultural baggage of mankind and humanity.

Sex is one of the areas of our lives in which it is considered normal to lie. We lie in order to give pleasure to the other person, not realising that this lie can - and will - infect all the other important things in life. We forget that sex is a manifestation of a spiritual energy called love.

It is very difficult to put this realisation into practice, but we must try. The first thing to understand is that during the sexual act there are two opposing states working alongside each other: relaxation and tension.

How can we reconcile these two states? Very simple - stop being afraid of making mistakes. If we embark on the search for pleasure wholeheartedly, sincerely, we gradually feel the body becoming tense as the string of an archer's bow, while the mind relaxes like the arrow preparing itself to be released. The brain is no longer in control of the process, which is guided instead by the heart. And the heart uses all five senses to reveal itself to the other person: touch, smell, sight, hearing, taste are all involved, just as they are in experiences of religious ecstasy. It is strange that, in most sexual encounters, people use only touch and sight, and by doing so diminish that sense of plenitude.

If you give yourself entirely, you will break through any mental block your partner may have, however impenetrable, because the act of giving yourself means: 'I trust you.' At that moment, real sexual energy comes into play, and that energy exists not only in those areas we term the erogenous zones. It spreads throughout the whole body, into every hair and every pore. Every millimetre is now emanating a different light, one that is recognised and absorbed by the other body.

When this happens, we are drawn into a kind of ancient ritual that offers us the opportunity to be transformed. Any ritual, of whatever sort, requires from the participant a readiness to be led towards a new perception of the world. And it is this willingness that gives the ritual meaning.

This may all seem overly complex, but it is far less so than treating sex as it is treated today, as a mere mechanical act, which creates tension during sex and a feeling of emptiness afterwards. We must become aware that, when two bodies meet, they are walking together into unknown territory. To make this into an utterly banal experience is to lose all the wonder of the adventure.

But none of this can be learned from a book, which can only share with the reader the author's own experiences or views. Sex means, above all, having the courage to experience your own paradoxes, your own individuality, your willingness to surrender yourself. That is why I wrote Eleven Minutes, in order to find out if, at this stage of my life, at 55 years of age, I had the courage to learn everything that life has tried to teach me on the subject.

Beautiful Karlsruhe ... if only I had a chance to see it! :)
AMMA was a great conference, but when the bus picks you up every day at 7:30am and drops you at the hotel between 8pm and 1am...sorry for the sarcasm :)
My feeling is that the city is nice, but will have to confirm and get back to you on that one. For sure it has a couple of nice breweries, a few decent bars and a live Chrismat market in Decemnber :) Oh, and don't forget the zoo, which for some reason takes a central place in the city layout.
But again, truth to be said, Karlsruhe has its charm!
Tonight was the first and only night to get to glipmse at the city, and to have my second gluehwein for the season. Prost!
Lesson of the night: the more one sips from the cup, the more handsome the men seem, the easier German language gets, the warmer the weather becomes ...from the inside out :)
Well, Karlsruhe offered a few more memorabilia events, but ... what happens at AMMA stays within AMMA, so... ;)
Viva La Ciencia!!!
No comments:

Beaware of the data ports 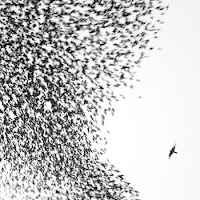 In the nowadays high-tech society, comunication via the internet is 'the usual'.
E-mails, Instant Messages, Text Messages...I was in fact pleasanty surprised that pen-pal societies (meaning paper letters) still exist.
Today though I want to share the experience of how the high-tech and the good'o' tet-a-tet chit-chat could work out well together. As I was surfing the net during the conference coffee break a colleague asked to share the power outlet I used and also the wireless data port 'juicing up' our browsers.
One thing led to another and before you know it I made a friend.
A friend full of zest for life, energy, charming smile, wit, sincerety beyound limits and awesome sense of hummor. What more!
'Count your blessings!' he said to me and I think I'll count him as one.
Have a safe ride home!

"What is a friend? I will tell you...it is someone with whom
you dare to be yourself." - Frank Crane
No comments: 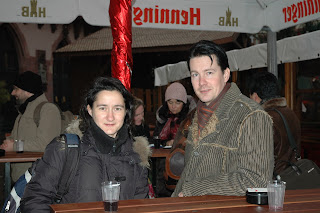 Arriving in Germany on November 25th is a briliant idea!
This is the day when the Christmas markets are all set up and ready to open the next day and welcome the crowds of local and tourists that have patiently waited a year to come again and have a cup (or more) Glühwein, mingle with people, enjoy a conversation and revive the Chrismas spirit! I love it! So I do it...already a second year in a row :)
First stop again is Frankfurt. Sauli and I agreed that the Glühwein taste is an accumulative function proportional to the number of wine sips one has, i.e.
the more you drink, the better it tastes. Prost!
Soon to be hit... Karlsrhue, Darmstadt, Heidelberg, Koln, Strasburg, Saarbruken...and Madrid. Wait, that is not in Germany...well, yes, so? :)
No comments:

In a week I am heading to Europe again...
And before the year is over, I think it is only fare to let you see the photos from the last 12 or so months. I am using a new host now - Shutterfly
http://IGBG.Shutterfly.com

Albums do not appear in crohonological order, but once I figure out all the features Shutterfly has to offer, I'll set some order...or may be not :)

Appologies for the tons of pictures, but I hope each of you find something to enjoy!
No comments:
Newer Posts Older Posts Home
Subscribe to: Posts (Atom)