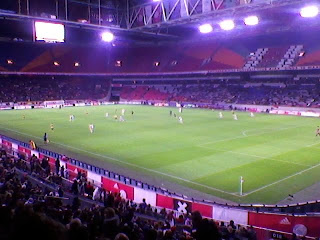 The first time I went to a live soccer game (excuse my American way of addressing football!) must have been back in the late '70s - early '80 when Dad took me to a game of Trakia, my home town's team. It was at about the same time Dad took me fishing with him for the first time... He must have been really disappointed that his second child (me!) was again a girl if he was trying so hard to instill in me some manly hobbies...anyway!
I remember I was bored, very bored, especially after I finished the two packs of sunflower seeds. I fell asleep. Then I was awaken by the crowd's shouts and screaming...we won! And then I was happy to go home.

Observations and random thoughts:
1) The stadium seemed smaller than when seen on TV.
2) The lights were nice and bright!
3) Ajax was definitely the better team!
4) The players seemed younger than I expected...perhaps because I'm used to watching Marco van Basten and Ruud Gullit, when I was a teenager... Trivia of the day: Did you know that Ruud Gullit and I have the same Birthday?...only I am 10 years younger? ;-)
5) The hotdog and the beer were good! I just wished it was a bit warmer so I can have another beer...
6) I should have bought an Ajax scraf...at the least!

Long story short - it was great fun!
I've been passing by the Arena many times now, on the train, and every time I think 'I should take a photo for my Dad'...Now I think, perhaps I should get him a ticket to see Ajax...live! Hoping he would enjoy the game more than me...thirty-something years ago... :) 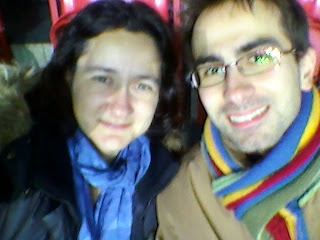