My first trip to Japan (Part 3) 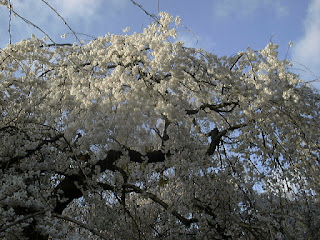 Early wake up. A long day is ahead of us. Diana asks me if I prefer tea or coffee. Coffee, I answer. With milk and sugar, or black, she asks. And now I have to smile. It's been more than 8 months since the last time someone asked me in the morning how I like my drink. Feels nice!
Somehow I don't feel any jet-lag. That's great, we won't be wasting time with it, so we head to the market - with the bicycles. To an American that may sound a bit odd, but to a Bulgarian that's fine. It's a good idea to take the bikes, because we can see more of Okazaki. Everything around me is so interesting - tiny houses, narrow streets, even the cars are miniature versions of what's driven in Europe and America. The tree crowns are chopped oddly, very short branches. It's so that they don't get blown by the winds and not to tear any electric wires. And all wires are above ground - because of the earthquakes.
We first go to the Grand Market, where most stores are American chains. Feels like back home, but wait...the grocery store is also a miniature version. Very small shopping cards, small packages. Coka-cola is nowhere to be found in a 2 liter bottle, the max is only 1 liter. The largest milk carton is also maxing at 1 liter - not like in America, by the gallon (3.78 liter). There is an abundance of food that looks unfamiliar and I can't stop asking about this and that, and the thing over there... Diana still has the patience to answer my questions, but very soon she will switch to a 'Well, I'm not entirely sure.' because even after a couple of years in Japan, she is still as lost as me at times.
After we added a cake and a box of birthday candles to the shopping card, we can call it success! We have everything needed and we are ready for the party!
Back at Diana's apartment and before the guests arrive we sit down to plan the following two days. We will go to Tokyo and visit the graveyard where Mikao Usui was buried after his last years of work with Reiki. And then we will head to the foothills of Fuji, where Diana's son could play in his favorite Tomas's land park, while we enjoy the snow covered mountain. In order to plan it all, since there is no internet in the apartment, we open a number of travel guides, maps, train schedule tables...and Diana starts reading, looking for connections, hotel to stay at, checking the distances...and I feel like an idiot, because I don't know a word in Japanese!!! My PhD is worth nothing, but at least it's fun to watch Diana figuring it out!
Next comes the party. But I'll save you the details ... the important thing is that Kliment managed to blow all 4 candles in 3 attempts...attaboy! and had tons of presents to unwrap!!!
And the adults had all kind of rice cookies and snacks, and some sushi too. You gotta love rice!
The company consisted of 4 Bulgarians, 1 Russian, 1 German and 1 Thailand lady. The last two compeated in a speedy-getting-drunk Tequila contest...The German lost! Still...a good show! :) The festivities ended around 2am ... quietly watching a Russian movie.