Making the most of Almere - a 24 hour adventure 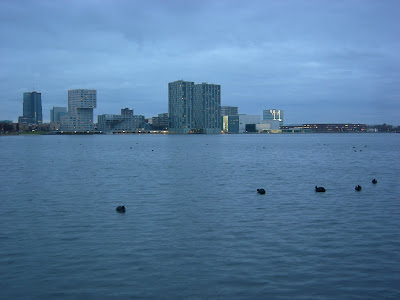 Most times I plan my travels, weeks in advance.
Other times... I just hop in the car and drive off. That's what happened this last Friday...
I needed to escape! I needed a destination that is simple, yet not too bland; offering some quietness, yet something for my curiosity too. With the engine already on, I contemplated Rotterdam, the Delta works, Texel and finally decided to go to Almere.
Why Almere? It's not too far, it is on the IJsselmeer, a nice day-spa is in the vicinity of the city, and because it is a new city ... it's full of contemporary architecture, which I am so fond of. Enough for a day trip!
The most intriguing fact about Almere, in my opinion, is its location. Almere is on the Flevopolder which was claimed from the IJsselmeer only in 1968. IJsselmeer itself was once a part of Zuiderzee, but turned into a lake after the building of the Afsluitdijk in 1932. In a nutshell, Almere sits on a man-made island, in a man-made lake. Isn't that amazing?
I find my way to the city center easy and I pick Hotel Finn for my one night stay. After a short stroll down the street I end at the massive City Mall Almere featuring 120 shops, movie theater, restaurants, etc. Fun! But with all my respect, it looks just like any newer mall in a bigger American city. Only the people speak Dutch :)
Next stop, Thermen la Mer. Easier said than done, because my GPS failed to find it. While driving left and right, with no clear direction, I accidentally end up on the Fontanapad, a small park with excellent view of Almere's skyline. What a luck! Amazing! I snap a shot and continue.

After another thirty minutes of driving and the GPS telling me to turn where there is no road (Arg!!!!)...I call a friend for directions and finally get to the spa.
I spent four blissful hours in between a Finnish and a Meditative saunas, a Turkish bath, a swimming pool and also enjoyed delicious dinner and a drink. All my daily troubles melted away... at 90-95 dec C.
Back in the hotel a comfy bed was awaiting to offer a nearly ten hour sleep.
On the next morning I set the GPS to take me to Eilandenbuurt and Tahitistraat. There I saw some of the Gewild Wonen Expo 2001 Flexible Housing homes and also the pretty cool Exhibition Houses. To tell the truth, most of the residential areas are joy for a contemporary architecture fan like me. I snap a few shots from the car, because it feels a bit awkward taking a photo of someone's house... Imagine someone is doing it to me. Would I be thrilled? Perhaps not :-) If they only knew how excited I was to see their homes. I start wondering how they look on the inside...but I doubt I would ever find the answer to this question. 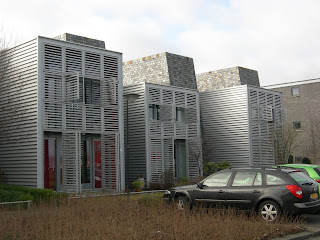 From there I took another wild shot at driving randomly and ended on the Gooimeerdijk, near by the city beach where I went for a walk. After that drove to the Muiderzand Marina - an old friend of mine. I visited the marina back in December, but the water was frozen, the boats were out of the water - they looked a bit sad on their stands, reminded me of trees without roots. Now life was back, watter glittering under the sun, wind almost pleasantly warm, boats making clinking sounds, ready to sail. 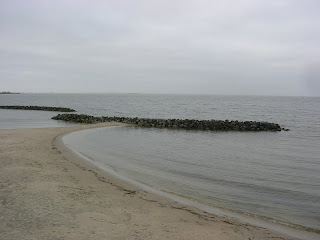 Now I take the Oostvaarderstdijk. It is not a big dike, but it's the first time I could see clearly how the land to the right is really laying lower than the water on the left. Unbelievable, but true! Windmills to the right are turning ... typical Dutch landscape.
Last stop before I head home - the Polderland Garden of Love and Fire. This place must be many times prettier when the trees are green and the sun in shining, but even now, it was very pleasant and had a very calming effect with the three canals, the minimalistic sculpture, and different trees in perfect straight rows and lines. The architect was inspired by a poem to create this project, The living flame of love, and the lines in the garden represent the connection between people in different places and times. So pretty! 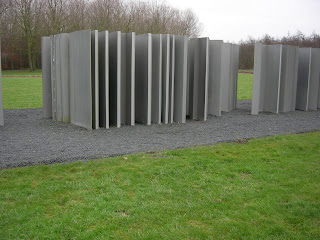 With this my 24 hour adventure making the most of Almere was complete.
It was not the most exciting trip of my life, yet, it was very pleasant and relaxing. Interesting and adventurous too!