Slap in the face of single people 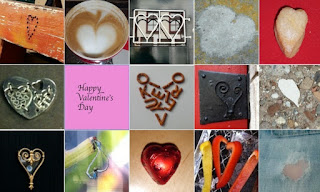 As if it's not tough enough to be single (assuming you fail to snatch a romantic partner despite your best attempts), but 14 February comes as a slap in the face of single people every year.

I am not gonna bitch about my single life - for the time being it's my choice. But some years ago, when I most sincerely was looking for love and not succeeding, it was most excruciating to witness shops, restaurants, bars, practically every social locale,  turnings crimson red from hearts in all sizes. Arg!

So what, 'Job well done, Cupid!', two people are in love, yay!
Studies have shown that the end of January is the most depressing time of the year. Let's add some more drama to it and have St.Valentine's day two weeks later. Eeek!

I am sick of reading restaurant menus stating that paella is only prepared for two, that the tempting dream holiday in the Caribbean is priced on the basis of two, all the cheesy commercials with couples in love , diamonds, red roses and heart shaped balloons... Will you be my Valentine? That almost sounds like a one-night-stand proposition...Sure! Next day it's 15 February. St.Valentine is gone, and so am I.

In the US, fortunately, your social status is not your future boss's business, but in Europe they make you rethink your life choices all awhile you are making a career choice. 'Do you have a family? Are you moving to 'city/country name' alone?'  How is that any of their business?!

A few years ago, my Bilbao-London flight was cancelled, and passengers were to be accommodated in a hotel for the night. A bus took us to a fancy hotel. First they accommodated the kids - a group of Spanish pupils was going on a field trip, then they proceeded with the families with kids, then the families and couples without kids, then everyone that was not traveling alone. The singles - about 11 of us, had to wait another 45 min on the bus. Somebody joked we should  get to know each other to the point of forming 'couple' for the night, just so we get off the bloody bus (been  2.5 hours already). Will you be my Valentine?

So, what is Valentine's Day all about? Are we celebrating love itself, or is this holiday exclusively for couples? And what about us, the single ones! Can we claim our own Holiday? What about Bachelors' Day 6 months later, on 14th of August? A hot summer night party may actually up the numbers for Valentine's Day...Sounds like a great idea to me! Until then...screw Valentine's day!