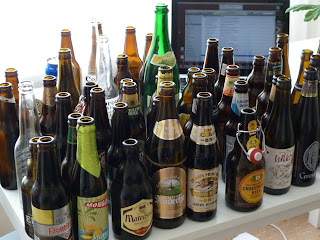 It was back in July, warm summer evening, I went for dinner and drinks with Bart and Erik. One thing led to another and I learned that it was not only my Dad experimenting with home made spirits. Erik and his Dad were trying to brew their own beer. Attaboys! Of course, I had to twist Erik's arm to promise that when the beer is ready we will try it.
Fast forward a couple of months...Erik reported that the beer is ready, it was time to taste it! So we threw a beer tasting party!
(But not before I secretly tasted the home-brewed-liquid gold...and gave it two thumbs up ;-) ... )

To be honest, I did not expect who knows what from the party. I recently hosted a Wine tasting party too and I was wondering if people won't just think of me as an AA...lol May be I am not far off on that last statement, but I was wrong on my expectation...
I was so happy to see with how much enthusiasm everybody embraced the idea. Each of us was supposed to bring 5 unusual beers. Most of the beer came from Belgium (God Bless Belgium!), but we also had beer from Japan, Tanzania, Mexico, The Netherlands - including some local Utrecht beer!, Switzerland, USA, Scotland, Australia...and the most unusual one was the Coconut beer from Germany/Gana!!! Aside from Coconut and hop, we also tasted berry, cherry and banana beers. Strength-wise, we went from 4.6% (Corona) to 10% (Maredsous). Bottle sizes varied from 330ml to 750ml. Amazing variety, any way you slice it!!!
The Pragt's beer was a total success too...judging by the fact that even my hidden reserve bottle of it was open and gone... :-)
Good job, Erik!

To wrap it up, I'll simply say...I had an awesome time! With friends like that life is festive, fun, fabulous!!! With or w.out the beer... :-) Thank you for coming and I hope you enjoyed it too!

The evening in photos...CLICK HERE 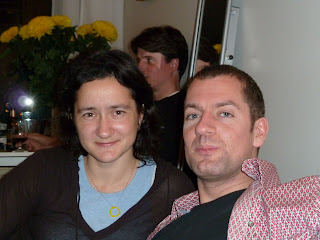