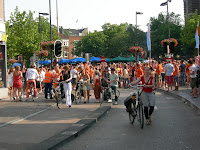 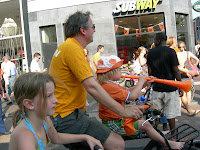 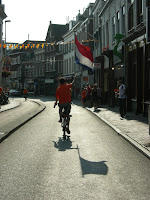 Being an expat during a World Cup Championship is tricky. Which country to cheer for, what if your favorite team is playing the team of your friends, but it is a fun time nevertheless. I can't tell you what moves me most - is it that something as simple as a game with a ball is uniting nations? is it to see the glowing happy faces of the winning team? is it the ocasional player breaking in tears after a loss? It is a strongly emotional time - determinatin to win, years of hard work on the line, pride, determination, loyalty...Football is like no other sport! Watching the World Cup in the Netherlands is an experience like never I seen before. Streets all in orange, and the national flag, everybody wearing orange on a game day...the atmosphere is fantastic! I watched Netherlands wining over Slovakia in a pub with a colleague. The place was packed, and with one common want in mind, it was great to be part of the crowd. Screams, shouts, cheers, the vibe was unbelievable! I thought I had seen it - the Dutch way of enjoing a game! But then a week later, another great game and the Netherlands won over Brazil! The the oranje madness hit the city! It was like Queen's day is happening again...an orange sea was flooding the center of Utrecht and everyone was so excited, so deliriously happy, drunk from the pleasure of winning! And I was in the middle of it...unbelievably easy to forget about all else, and celebrate, and be happy to be in the right place at the right time! Go Holland!!!