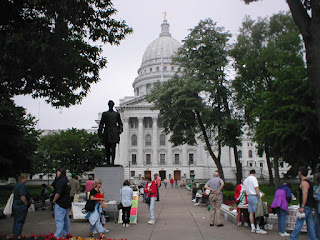 It is hard to believe that it's been almost a year since the last time I had updated this site.
Well, I can tell you that much, I have not been wandering around with spare time on my hands.
Here are some of the highlight from between now and then...

December - heavy on travel. I first visited my Spanish friends Maria and Almudena in Virginia. We spend a weekend exploring Norfolk, Jamestown, Williamsburg, and the area. Very relaxing!!! Most embarrassing moment - it turned out Pocahontas was a woman...what was I thinking!?!?! Next, I flew to Seattle to spend Christmas with family and friends. It felt nice, but it was way too short a
visit! And finally, the New Year 2006 found me in the French Embassy in Washington, DC - party time!!! The first hours of the new year were spent driving around the city, enjoying the night charm of the Washington Monument, The White House, The Capitol, and the Potomac River. The first day - a getaway to Annapolis, MD. The weather was glorious! We walked the waterfront and winded down in a coffee shop, with cake and a game of backgammon. Dorothy won! :) Oh, well...

The new year asked for a new job too. I was awarded an NRC Fellowship with NOAA-NESDIS, and so I moved to Wisconsin! It was a fast-paced move, but I made it - in two days I was packed and out of my apartment in Urbana, drove to Madison, and the next day moved in into my studio. Tiny place, but cute, with European looking bathroom, a city view, and only a couple blocks away from such important hallmarks as the Capitol, State Street, Monona Lake, etc. etc. Also, only a mile away from work, so I can walk, bike, take the bus, or drive (on a very lazy day!)... :)
Working at CIMSS is the best! My head might be in the clouds, but I really like my new job!!! Cool people, fun projects, ...what else could one ask for! Living in Madison adds to a good deal! I'm happy with my life here!

Shortly after I moved to Madison, I had the incredible chance to go to a conference in China! Lifelong dream come true! Maybe not the perfect timing for a trip to Asia, but life is like that! When you had just moved to a new city, started a new job, barely settled in a new place, the last thing you feel like is the extra 'life stir' of going to a country where you won't be able to say nor understand a word! Well, but the spice is not in the jar, it's in the attitude! So I took another deep breath, stretched a brand new smile on my face, and let life show me its next surprise. And that is the beauty of having no expectations - then things start happening on their own and out of sudden you realize you have it better than if you'd have planned it! All I have to say about this trip is...it was a trip of a lifetime! And just like a few years ago, Japan did that to me, China too applied its "Asian magic" and made me see the world in a new refreshing way - I was caught again unaware of the desire for life in my genes, so that one emerged and everything becomes colorful again.

The months after China seem a bit uneventful, but that's what Summer is for, to relax and unwind. Bike rides, gathering at the Terrace, fine dining, photoshoots, going to the Farmer's Market on Saturday, reading books, BBQs - these are the colors of my first summer in Madison. I have posted some pictures on my webpage to give you an idea of how my life has been passing by...

Well, there was one more week this summer that was very special - the week of the AMS meeting in Madison. Many former colleagues showed up in town, friends I have met at other conferences years ago were here too...it was amazing! And also of interest are the "Almu adventures" :):):) Almu arrived from Spain on the weekend and first, we went to Chicago! The week to follow was needless to say "sleep-deprived", but who cares when the fun is rolling :)

And just so that you don't get totally jealous of my cool life I should admit that it had some gray shades too. But what doesn't break you makes you stronger, so let's say I'm stronger now and I'm moving on... :)
Hope you all are having a great summer!