Lessons learned from the IFFR at 80km/h winds 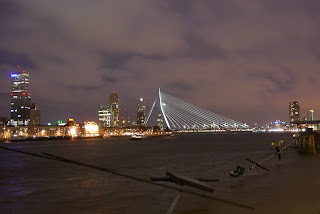 IFFR stands for International Film Festival Rotterdam. This is the Dutch version of the Madison's Wisconsin Film Festival. Movies from all around the world are shown for a week in various cinemas and it's a buzz event in Rotterdam. This year, for the first time, they had additional showings in Groningen too. On Saturday I went to see a couple of movies in Rotterdam with a CouchSurfer friend of mine.

The first movie we saw was The Eighth - it was advertised as a 'Bulgarian Western'. Having lived in Bulgaria for my first 26 year, I would not call it an 'western'. It was the typical 'partisan' movie from my teen years - the 'good' guys(the communist partisans), the 'bad' guys (the fascists), one minute long love story, and a lot of shooting followed by the good guy's victory. Seeing this movie in my late thirties, after living in US, UK and now the Netherlands, made me sad - we grew up so brain-washed, with a sickening sense for guilt and drama. Who needed it? Who was it good for? Why did we believe it? Questions I don't plan to answer here... but now I know better why I am the way I am...self-criticism and drama were big in the time of totaliarinism...and they still linger in my life! Well, time to change!!!

The second movie - Le trésor des îles chiennes. A Frech production. Well...we left mid-way through the showing. Enough said! One black and white movie was enough for the day! And not another depressing pointless plot - hunger for money, people manipulation...Eeeuw! With monotonic music boring into your brain to the point you want to scream! WTF! Who would enjoy that???

Lesson 1 learned - pick carefully the movies you are about to see (AND PAY FOR!!!)

The rest of the day was luckily a lovely time! My Rotterdam host gave me a very nice walking tour, and intro into Rotterdam's story and history, incorporating my favorite Erasmusen bridge, a few interesting monuments, a great Italian restaurant and a cozy bar when we chatted for a long time.
Thanks Erwin!
The 80km/h gales of wind did not stop us, they were strong, but warm and gentle too. I actually liked them being playful, messing my hair, blowing up my (rather short) dress, and blowing far and away the disturbing thoughts the movies brought up.

Finally, to tell you the truth, I had already seen a couple of IFFR movies - Never let me go, Black swan, Another year...and they were much better choices...and free! 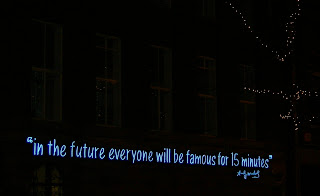